I started commuting back and forth from the Huron Mountain Club to Marquette two or three nights a week to play band jobs in the summer of 1972, my second year working there.  The three years I worked at the club are easy for me to keep straight because I had a different vehicle each summer.  My brother was in the Army in 1971 and was nice enough (and trusting enough) to let me drive his 1969 Camaro (generating comments like, ‘How much do they pay you to be a dishwasher?’).  I was between bands so my driving was limited to going home for my one day off a week and occasional jaunts to Big Bay.  My third summer there,  I had an old beater of a Chevrolet Belair with three on the tree and enough oil leaks to require additional oil every third fill up.  Ironically, the summer I started my frequent driver program, I was using my folk’s Chevrolet Caprice.  Call it a hog, or a battleship, or whatever term you want to use for this gas guzzling beast because it had a 350 cubic inch V-8 engine that got about 12 miles to the gallon going down hill with a tail wind.  Don’t get me wrong;  it was a nice car but after spending the previous summer using my brother’s Camaro, this felt more like driving a tank.

The gas mileage wasn’t a big concern because at that time, gas was about 24 cents a gallon.  As a club employee, I was also afforded a discount when I filled up at the club garage which made my actual cost about 20 cents per gallon.  You read that right:  20 cents a gallon!  The first OPEC oil embargo would not occur until October of 1973.  The embargo caused the price of gasoline to rise 43% by the summer of 1974, but we were blissfully unaware of what the future would bring in the summer of 1972.

My ridiculously overpowered, gas sucking Caprice was actually purchased to be my mother’s car.  She drove it so little that it only had 12,000 miles and change on the odometer after the first few years we owned the car.   It therefore seemed only logical that I should put some miles on it as long as I was going to be driving back and forth many times a week.  It was widely known by those working in the kitchen who did not have access to wheels that I was available for taxi service to Big Bay if someone needed to make a phone call or stop at the general store.  If a couple of the riders were small, I could (and did) put seven passengers on board.  I said ‘taxi service’, but I would not have even considered asking for a dime in return.  Why would I with gas costing all of 20 cents a gallon?

The 350 cubic inch engines were usually found in cars with names like Camaro, Nova, and Corvette so I always thought it was kind of funny to have such a big engine in a basic passenger car.  I got the surprise of my life one day when we were planting trout for the club along the Salmon-Trout River and a pale mint green colored station wagon pulled into the small parking next to the tank truck we were unloading.   Out popped a little old lady from the club who dropped her line in the river, pulled out a couple of trout and hopped back into her vehicle.  I was amazed at her fishing acumen until my buddy John mentioned that planted trout raised on hatchery food are willing to bite anything when they are first released into the wild.  He also predicted we would be cleaning them for her dinner that night and sure enough, when we reported for our dinner shift, there they were with a note requesting that they be cleaned and cooked for her dinner.  I was even more amazed when she drove away with her catch;  her tailgate displayed the three raised numbers indicating the engine size of her fish mobile:  400 cubic inches!  Suddenly my 350 cubic inch V-8 powered whale almost seemed sporty.

We were allowed to hike the trails at the club in our free time.  Some of the trail heads were located in various remote areas of the club which required a key to get past the locked gates used for traffic control.  We passed may bewildered club members out on day hikes as we  lumbered down  these two rut roads in the green beast.  Being young and not the sharpest knives in the drawer at times, we decided to see who could drive their car the closest to ‘E’ on the gas gauge without actually getting stranded somewhere.  Let me see:  there are 20 miles of road between the club garage and the next gas station in Big Bay and miles of road within the club boundary that we travelled.   We purposely flirted with running out of gas in the middle of nowhere?  Yep, just the kind of thing you do when you are young and foolish.  Did I mention that much of our off time traveling was done after our dinner shift – at night – in the dark?    We didn’t think much about Sasquatch or cougars or bears back then, but maybe we should have.

The Caprice had a 24 gallon gas tank to go along with the 350 cubic inch V8 and I recall winning our little contest by putting almost 23 gallons of gas in the tank at one fill up (which cost me a little less than five bucks).  I don’t recall winning anything but bragging rights, but after I congratulated myself on this great victory, I began thinking of all the places I could have gotten stranded and how far I would have had to walk to find gas.  I counted myself more lucky than skillful and vowed to never let the needle drop below one half again.

I am not an economist and I also don’t own a time machine to go back to the good old days, but I still crunched a few numbers just for fun.  In 1972, my 12 miles per gallon beast cost me 1.6 cents per mile to operate, based on my 20 cent per gallon fuel costs.  If I was still driving this car, the $2, $3, and $4 per gallon I have paid over the last 30 years would yield a per mile cost of 16, 25, and 33 cents.  My current car averages 30 miles per gallon and if I apply the same fuel costs to my newer vehicle, it comes out to 7, 10, and 13 cents per mile.  Using the middle cost of $3.00 per gallon, the cost of operating my old Caprice would be 64% higher today than in 1972.  My Fusion’s operating costs are only 16% higher than what I was paying in 1972.  It would seem that all the tree huggers (that includes me so save your cards, letters, and e-mails) who have been pushing for better milage from internal combustion engines were on the right track.

I enjoyed my two summers of commuting between kitchen work and band jobs which kept my tuition paid when I went  back to school in the fall.  I spent the fall and winter of 1974 wondering if I would be able to keep up the same schedule for a third year.  Fate intervened as several intersecting events made all my worrying moot.

Ray, the guitar player in Knockdown, mustered out of the Air Force and we played our last job in June of 1974.  I was given the opportunity to take a summer class and be the student manager at NMU’s Field Study camp east of Munising at Cusnio Lake.  Without a band,  I figured the NMU job would be a good resume addition, so I moved on from my commuting between two jobs to having the luxury of taking summer classes and working at the same location.   I was obligated to return to the field station every weekend in September and October to run the place for weekend campus retreats, so I would not have been able to do weekend gigs for those months anyway.  As luck would have it, it was during my three weeks of  vacation between summer school and the fall semester of 1974 that I ran into Barry Seymour and Sledgehammer was formed.  We were able to compress a lot of rehearsal time into  two months and by November, I was back to doing gigs with our new band and school.

Most of my band job commuting in Sledgehammer was confined to Marquette County but in the year we were together, we ventured as far west as Wakefield and Iron River, as far east as Munising and as far south as Coldwater, MI, by far the farthest band gig commute I have ever been involved in.  I am not sure any sane band would book a one off dance gig that involves a 900 mile commute, but we did it and the mileage write-off for that one gig took care of my tax problems for the whole year.  No wonder one of my favorite Willie Nelson tunes is still On the Road Again. 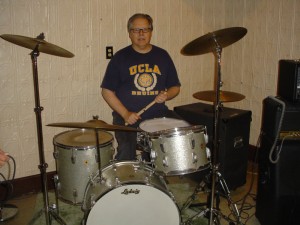