When we last heard Brady Guilbault on the air in Ontonagon, he was part of a multiheaded radio hydra we affectionately called Let’s Be Honest.  Brady and crew signed on as part of thier Senior Service Project class and began charting new territory for WOAS-FM.  They may have gotten the original idea from working with Tom Croteau the year before, but they certainly put their own spin on ‘anything goes talk radio’.

Since graduating from the Ontonagon Area Schools in 2013,  Brady has been attending Northern Michigan University.   He has found his way back on the radio doing the color commentary for Negaunee Miner football as well as Miner boy’s and girl’s basketball.  WOAS-FM asked Brady to fill us in on how he ended up on Sunny 101.9 FM and here is what he sent along:
“My partner’s name is Jesse Anderson, and he is my brother-in-law.  He was on the radio with the same station last year, just doing my current job.  Carl Johnson handled the play by play, Jesse did the color commentary and I was their stat guy.  Carl ended up getting married and moving to Muskegon, so the station offered Jesse the play by play job and Jesse promoted me from stat guy to the color commentating job.”
When asked if he has had any ‘memorable radio moments, he said, “It was this year when I did my first play by play game.  Just a couple of weeks ago, Jesse had to work (his regular job) and I had to do my first play by play alone!  It actually went very well.  I was a little rocky at first, but when I got into the game, I was so busy I couldn’t think about being nervous.”
Brady went on to say that he is really enjoying being on the radio again and thanked WOAS-FM for getting him started.  We are always glad to hear from our former DJs who land radio gigs after leaving the halls of OASD.  Maybe this is how Bob Uecker got started!   Good luck to you Brady, and thanks for keeping us posted.
Photo:  Former WOAS DJ Brady Guilbault (left) doing color commentary for Negaunee Miner football on Sunny 101.9 FM withi his partner Jesse Anderson. 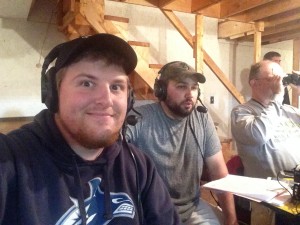