The West Coast Bureau of WOAS-FM has relocated to Eugene, OR so it an inspection visit from the manager was on the agenda for mid-August.  Many thanks to Elizabeth, Todd, Don Juan and Emma for their hospitality.  Many hours of music ensued and we sharpened our Wii skills a bit.  What?  It WAS afterall, an inspection/vacation!

We also hiked the many miles of trails along the Wilamette River as well as the trail to the top of Spencer’s Butte.   We took an outiung through the coast range to Waldport, down to Cape Perpetua and Florence.  We visited some local establishments, had a thirty year overdue dinner meeting/visit with my old classmate Mitch Eastman who took a swing down from Portland, and attended at Northwest Short Season A League game between the Eugene Emeralds and Spokane (photo below).  Spokane won but it was a fun evening at PK Park – and no, the PK does not stand for Phil Knight – the Nike CEO does dontate generously to the University of Oregon (and not just to the athletic program), the statium is not named for him – it is named after former athletic director Phil Kilkenny.  PK Park is the home of the U of O Ducks and sits next to their football stadium, Autzen Stadium.   While some have taken to calling Oregon ‘Mariotta U’ in honor of the 2015 Heisman winner or the University of Nike for Knight’s involvement, it is the biggest game in this town of 150,000.  LA may have UCLA and USC (with Stanford lurking nearby), but Eugene has the Ducks.  Their arch rivals from Oregon State University are just a few miles up the pike in Corvalis making U of O THE game in town on football Saturdays.

At the time of my visit, there were some 95 fires raging in the NW so there was a perpetual haze hanging in the mountains and drifted into the valley.  Interestingly enough, Eugene itself is only 400 some feet above sea level compared with Lake Superior’s 602 foot elevation, but a drive to the Pacific reveals how rugged the surrounding mountains are.  Think the Porcupine Mountains on sterioids!  The one thing we didn’t do was see any live music although we missed Slightly Stoopid by a week or so – but there will be time for that in the future!

Speaking of music:  A jet-lagged manager staggered back into Ontonagon late Wednesday afternoon so our usual week of pre-Porcupine Mountain Music Festival music was reduced to Wednesday and Thursday evenings.  This could have been worse because my original flight search kept running over the PMMF weekend itself, but missing the festival wasn’t in my plan and I was able to move it up a week earlier.  NEXT year we will get the full week in.

As expected, life at the Singing Hills stage was a blast – watch for a two part wrap up of Friday and Saturday with the crew of the ‘upper stage’ at PMMF#11 – Thanks as always to Mary and Marty from Armadillo Sound for keeping a tight ship and to Jackie M for keeping us all in good humor!  ker 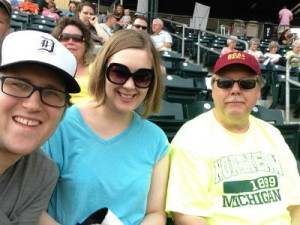