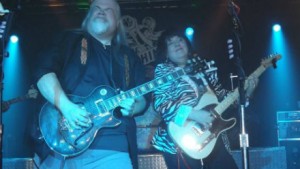 Rusty and Laurie Wright were kind enough to send us their ‘first paying gig’ stories.

Guitar World magazine has a Q & A feature in every issue that asks a famous guitar player about their first live gig.  Monthly reading of this section spurred me to start thinking about my earliest gigs and it was fun remembering how enjoyable (and how much work) it was putting a band together.  I wondered if I could coax some of the musicians I know into sharing a little information about their musical beginnings.  Knowing there are a lot of informal jams, free parties, and gigs for friends that come before ‘getting paid’, I decided to ask specifically for memories of ‘my first paying gig’.  I got a lot of wonderful responses and this will be a very easy article to write as I am going to just let them tell you their stories:

The very first response I got was from folk singer Kitty Donohoe in Ann Arbor.  I first met Kitty at the Singing Hills stage at the Porcupine Mountain Music Festival and we have been lucky enough to get her back for many performances as she frequently makes what she likes to call her ‘Pasty Tours’.  Kitty wrote:  “I think my first paying gig was $10 in a lounge in Somewhere, Indiana – maybe Angola – and it was awful.  Halfway through a song some stupid customer put a bunch of coins in the jukebox that was right behind me.  Okay then!  Guess I’ll go get a beer and give you a chance to hear some ‘real’ music.”

Cheryl Sundberg has been a follower of the Rusty Wright Band from the get-go (she was the recipient of the very first copy of their first CD) and introduced them to the western U.P.   I had asked Cheryl for a photo from their Ontonagon Theater show from the spring of 2014 and she suggested I contact Laurie LaCross-Wright directly.  While I was at it, I asked if she and Rusty would share their first gig stories:

Laurie LaCross-Wright: “ I was about 15 when I had my first paying gig. A group had called my high school looking for 30 minutes of entertainment for a ladies bowling league banquet. The request filtered down to me and my buddy Sid Peacock because we had a bunch of tunes worked up  – John Denver, James Taylor, Anne Murray-type songs. I don’t think we were initially supposed to get paid but the group took up a collection and we each walked away with $60 for that 30-minute performance. Now this was in the mid-1970s mind you, and I had been making a dollar an HOUR as an A&W carhop so we were both jubilant about making two dollars a minute!”

Rusty Wright: “ I was thirteen and finally had gotten to be good enough on guitar that my mother decided she could use me in her touring Southern gospel act. She simply told me I was going to be in the band. It wasn’t really a choice. I started rehearsing with them and in a couple of weeks I climbed into the tour bus and started doing shows with them.  My first gig was an out-of-town church event where we performed a couple songs at the morning service, stayed on for the church potluck and then the group would do a full concert performance in the evening. They weren’t paid a set sum – it was all freewill offerings so they took whatever they got – and a lot of it went back into things for the band. I don’t remember getting paid any cash for those shows but they bought music gear for me which I was really happy with.

The group was just starting to touch on contemporary gospel and my lead guitar skills were getting pretty good so I talked my mother into buying me a nice Maestro analog phase shifter for the sweet sounding, chimey sounds and an original Big Muff distortion pedal to sustain my notes on one soaring lead.  She was willing to indulge me to a point but overall the music was very conservative and she was adamant about walking that fine line. She still wound up dealing with more than one well-meaning church goer who cautioned her about letting me lean on those ‘devil music’ rock tones too much.

My first actual cash-paying gig was at a Jaycees-sponsored summer family event at a park pavilion. They hired a bunch of high school-age bands to play throughout the day. I was 15 and we each got paid $25 for our 30-minute set. It was the first time I’d had a $20 bill to call my own. I remember each band had to bring their own PA system so more time was spent setting up and tearing down than was spent playing music.”

Having previously written about my first ‘hired gun fill in drummer’ jobs, I thought I would mention the first paying gig I got to do with my own band, The Twig.  We played some house parties and free jams in any space we could find (many in church basements, as I recall) but all our rehearsals were focused on having enough songs to cover the first high school dance of the year that was traditionally held after the first home football game.  I had to perform my duties with the marching band and as soon as we were released after playing the school fight song between the third and fourth quarters, I beat my way back to the band room to change.  By the time I made it to the gym, Gene and Mike had everything but the drums set up.  This was our first gig with the equipment we had rounded up including a PA amp Mike had built from a kit and small pair of PA speakers we had purchased from Radio Shack.  The guitar and bass set ups worked fine and without any stage monitors, we could hear only a little of what was coming out of PA.  During the first break, a buddy came up and asked, ‘What’s wrong with your PA?  Every time you sing together it sounds like gravel in a cement mixer!’  Ouch!  We muddled through the rest of the dance and by Saturday afternoon, our first paycheck (and then some) was in the hands of the local music store owner and we had a better set of PA columns.

I have previously mentioned former Ontonagon resident John Fischer, in particular his role as a dancer  (I call him the ‘King of the Polka’).  When I arrived in Ontonagon in the mid-1970s, the Fischer brothers (John and Bob) were honing their skills in a Kingston Trio inspired group with Bob Colclasure.  Here is John’s take on their first paying gig:  “ Well, it was an interesting adventure to say the least.  My first paid gig would have been playing on the main street of Ontonagon for Maxwell street days in 1975 or ‘76.   Bob Colclasure set it up for us, my brother Bob and I to play for a couple of hours to entertain folks who were shopping the sales that they used to have on Maxwell street days in downtown Ontonagon.  If I remember correctly, they also had us play along the river for some sideline entertainment for the boat show that went on there during Labor Day also.  Though we never got paid much (maybe $20 apiece) I enjoyed it. Playing guitars and banjo and mimicking the Kingston Trio was a novelty.  Though we were far from polished, the Fischer boys provided good harmony to our fearless leader Rouse, who also entertained between songs with his continuous jokes and humor.  I still feel, he was the best MC you could hire in the area, as he had the ability to make people laugh without saying a word.”

Thanks to everyone who contributed their stories.  I may have to impose on my friends again (or they may stop taking my e-mails all together if I keep being a pest).  The other Guitar World feature I always read revolves what they commonly call ‘nightmare gigs’.  Like ‘first gigs’, everyone who performs on stage at some point has a ‘nightmare gig’.  Stay tuned – maybe I can coax a few ‘nightmare gig’ stories, too.