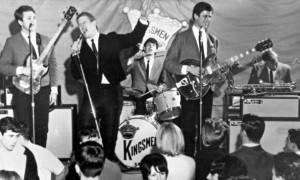 Anyone who spends any amount of time talking or writing about music will eventually bring ‘misheard lyrics’ into the discussion.  I would not want to feel left out of this club.  In fact, anyone who has had to figure out songs for a band to learn faces the task of unmasking mystical (and sometimes undecipherable) lyrics probably should be a charter member of the club.  Okay, so maybe a lot of rock songs aren’t meant to be very deep, but they should at least make sense!  One of the most often quoted lyric mistakes comes from the Jimi Hendrix song Purple Haze.  I played (and sang) along with this record a lot when learning to play the drums and I never heard ‘Excuse me while I kiss this guy’ –   I always heard ‘kiss the sky’.  It really doesn’t matter how the lyrics get bent out of shape or or misheard.   It has happened and will continue to happen as long as songwriters continue to pen lyrics and people try to sing them.

Perhaps it all started with Louie Louie by the Kingsman.  Written and recorded by Richard Berry in 1955, the Kingsman’s version was released in 1963.  The Kingsman took Berry’s straight 1-2-3-4 beat and changed it up to a more tribal (and easily recognized) 1-2-3, 1-2, 1-2-3, 1-2  rhythm that has been repeated by too many bands and on too many recordings to even count.  It was Jack Ely’s vocal that got everyone stirred up.  His slurred delivery was so garbled, even the FBI began a 31 month investigation amid accusations of ‘dirty lyrics’.   It seemed that no one could decipher what Ely was singing, so they began making up their own versions of the lyrics.  The Kingsman’s original recording sold so poorly that it didn’t even become a hit until a Boston DJ featured it as his ‘Worst Song of the Week’.  There were enough interpretations of what people thought they heard in Ely’s delivery that no marketing firm on Earth could have generated that much free publicity if they tried.

In the end, the national buzz about the song’s supposed ‘dirty lyrics’ sent it over the top making it one case where misheard lyrics (or imagined in many cases) actually caused a record to become a hit.  Just for the record, here are the lyrics just as Berry wrote them and Ely sang them:

Louie Louie, oh no / Sayin’ we gotta go, yeah yeah, yeah yeah yeah / Said Louie Louie, oh baby / Said we gotta go // A fine little girl, she waits for me / Catch a ship across the sea / Sail that ship about, all alone / Never know if I make it home // {chorus} {Louie Louie, oh no no no / Sayin’ we gotta go, oh no /  Said Louie Louie, oh baby / Said we gotta go} // Three nights and days I sail the sea / Think of girl, all constantly / On that ship I dream she’s there / I smell the rose in her hair // {chorus} // {vocal break into lead guitar solo} Okay, let’s give it to ’em, right now! // {guitar break} // See, see Jamaica, the moon above / It won’t be long, me see me love / Take her in my arms again / I’ll tell her I’ll never leave again // {chorus}.  Even the FBI couldn’t understand Ely’s delivery, let alone find anything subversive.

When Ray and I taught our Knockdown band mates Loggins and Messina’s Your Mamma Don’t Dance, we bumped into one of those hard to decipher lyrics on the middle eight section.  They describe a ‘parking’ episode at the drive-in theater being interrupted by ‘a light in your eye, and then a guy says, ‘out of the car, long hair’’.  The next section was up for grabs:  ‘Hoo wee, you’re coming with me . . .’ and Ray swore the next line was ‘to Leavenworth East’.  I couldn’t come up with anything closer than that so that is what we sang.  Years later, I heard the tune on the radio and for the first time heard it clear as day:  ‘ hoo wee, you’re coming with me, it’s the local police’!  I cringed momentarily for all the times we sang it wrong, but nobody ever corrected us so we will let that slide.

Southern rocker Zac Brown’s advice to ‘Let It Go’ includes a line that sounds  like ‘Like a sweet son said in Georgia, let it go’.  Former president and Georgia peanut farmer Jimmy Carter aside, what Brown is really saying is ‘Like a sweet sunset in Georgia, let it go.’  Misheard lyrics come from national anthems and history lessons, too, as in Canada’s Oh, Canada:  (misheard: ‘Oh, Canada, we stand on cars and freeze’ instead of ‘we stand on guard for thee’) and Billy Joel’s We Didn’t Start the Fire: (misheard: ‘We didn’t start the fire, it was always burning, said the worst attorney’ instead of ‘since the world’s been turning’).

Carly Simon scored a rare ‘double double and a mystery twist’ with her classic hit You’re so Vain.  First of all, there was always disagreement about who she was singing about (the ‘mystery twist’).  Speculation was that it was either Mick Jagger or Warren Beatty (and either would be a fine fit).  The double double’ comes from the lines heard as ‘with the wife of a postman’ (which is really ‘with the wife of a close friend’) and ‘clowns in my coffee’ (which is really ‘clouds in my coffee’).  As a person who prefers cream in his coffee, I can relate to the second one (the ‘clouds’ not the ‘clowns’).  Mike the bass player in two of my old bands had to sing it every time I doctored my coffee accordingly during our post gig meals.

Being a little deaf doesn’t help matters, either.  I tend to play music in the car much too loud because I am a little deaf (yes, my folks were right again).  Playing loud music plus a viral illness I picked up on a field trip 30 years ago (it knocked out the low and middle frequencies I can hear with my left ear) have effectively combined to reduce my ability to hear things, especially in situations where there is a lot of background noise.  My wife, on the other hand, has great hearing so when we travel together, the radio gets tuned to her hearing threshold, not mine.  As a consequence, I hear many familiar songs bubbling under the radar and my brain turns them into something entirely new.

Charlie Walnut?  We were recently traveling and I was trying to make heads or tails out of the song that was playing on the radio.  I finally asked my wife, ‘I wonder who Charlie Walnut is?’  She asked, ‘What are you talking about?’  ‘That song on the radio – it is something about Charlie Walnut.’  I am pretty sure she thought I was the nut at this point because when I turned up the volume, it turned out we were listening to Kentucky Woman as performed by Deep Purple.  If anyone wants to write lyrics to a song about ‘Charlie Walnut’, I know a great tune that it would go with.

If listeners ever find themselves wondering about the lyrics they hear on WOAS-FM  88.5, please feel free to drop me a line at ken@oasd.k12.mi.us.  I promise that I won’t laugh at what you thought you heard because I have already been there and done that!