It is a great philosophy:  K.I.S.S.   Engineers use it.   Mechanics use it.  Mathematicians use it.  Even coaches use it.  Keep It Simple, Stupid.  It is a self admonishment to anyone trying to solve a complex problem or fix a broken widget that (usually) the simplest solution is (usually) the best solution.  Oh, we got touchy-feely for a while and tried to reimage it without the ‘stupid’ at the end (we would not want to hurt anybody’s feelings after all, but I am sorry, K.I.S.  just doesn’t pack the same wallop), but it is never said as a put down.  Its beauty lies in remembering that the more complex you make your game plan, the greater the odds will favor failure.

In the fall of 1973, the Vikings of Cadillac (Michigan) High School completed an undefeated football season.  Hopes were high the next year, but the team dropped their first two games.  The coaching staff came to the conclusion that the team was just too tight.  Their own expectations following an undefeated season were hampering them on the field.  Quite simply:  they weren’t having much fun.

Assistant coach Jim Neff decided it was time to back off and simplify the game plan.  He told his defense that they were going to start using the ‘K.I.S.S. defense’.  To keep it fresh in their minds and lighten the mood, he began playing KISS records in the locker room.  It seemed to work and the team started to turn things around.  RockSteady, KISS’s management company, got word about the Vikings playing KISS records as a motivational tool and in very short order, Gene Simmons and Paul Stanley put in a call to the coaching staff to find out how things were going.  They asked the staff to keep them updated as the season wore on.

The next spring, the coaching staff took some of the players to see KISS at Cobo Hall in Detroit.  They got to meet the band backstage and invited them to come to Cadillac, which of course wasn’t going to happen.  KISS was just starting to break out of the New York area and Cadillac was too small and too far off the beaten path for a band headed for stardom.  Inviting them was the polite thing to do, but KISS visit Cadillac?  Seriously?

As summer waned and fall approached, KISS found themselves thinking about the offer to visit Cadillac.  Their closest midwestern show that fall was to be in Kalamazoo, 120 miles south of Cadillac.  They called Cadillac High School and made them an offer they couldn’t refuse:  ‘We would like to come to Cadillac on October 9 and 10, 1975 for your homecoming and we would like to do a concert while we are there.’   Cadillac not only embraced the idea, they declared it KISS weekend and the entire homecoming theme ended up revolving around KISS.

The homecoming parade featured KISS.  The cheerleaders wore KISS make-up.  The KISS band members rode in the parade and marched with the band.  Every student in the school district got their faces painted ala KISS.  KISS attended the homecoming football game and when it came time for the concert, they somehow managed to squeeze their massive stage show into the high school gym.  Cadillac gave KISS the keys to the city!  There are quite a few pictures of the whole KISS homecoming event in the book Nothing to Lose:  The making of KISS 1972 – 75 (Ken Sharp, Gene Simmons, and Paul Stanley – IT Books),  and if one picture tells a thousand words, everybody was having a great time.  According to football player Bill Barnett, this was the “most positive thing that ever happened in Cadillac.”

I became aware of KISS and Queen at about the same time the events in Cadillac were unfolding because a friend of a friend was a major fan of both bands very early on.  Anytime we hooked a ride with him he had his 8-track blasting away with either KISS or Queen.  My first impression of KISS in full make up was, “um, okay, but they don’t actually dress like that on stage, do they?”  Jon assured me that, “Yes they do dress like that” and that “they were signed to a major label record contract because even though their early records were terrible, the kids bought them anyway because of their outrageous live act.”  Had anyone told me that KISS was spending a weekend between tour dates at a high school in Cadillac and that the entire town embraced them like conquering heroes, I would have had my hearing checked (and probably should anyway as Jon played his 8-track very loud!).

I picked up Nothing to Lose knowing absolutely nothing about the Cadillac incident.  As a casual KISS fan, I never knew how hard the band worked to climb to the top.  The whole story about them carving their own niche in the rock world is fascinating from the make-up to the breakup of the original line up.  Even little details like Paul Stanley’s habit of scratching his head on stage evolved into  part of the act.  From time to time, Stanley will take both hands and ruffle his hair in a very diva-ish manner.   This became one his signature stage moves when the band’s manager took a habit that annoyed him (Stanley constantly scratching his head) and turned it into part of the ‘Star’ of the band’s persona.  By the time I got done with the chapters about their visit to Cadillac, I had a newfound respect for KISS.

I also found the negative press they generated interesting.  If KISS was such a disaster, how did they manage to last so long?  It is a great testament to their fan base (the KISS Army, if you will) that even the Rock and Roll Hall of Fame couldn’t ignore them any more.  It is too bad that their induction became a tug of war between the current touring version of KISS and the RRHOF.

KISS has rolled with the punches over the ensuing years.  Stints performing with and without their make up have come and gone.  These days, a KISS concert may feature a couple of newer band members, but it is still a full on theatrical production including costumes, makeup and tons of pyro.  Gene Simmons’ various stints on reality TV (Gene Simmons’ Family Jewels and The Celebrity Apprentice among them) depict him somewhere between Ozzy Osbourne the family guy and Donald Trump the business guy with heavy emphasis on the “I will explore any avenue that will push the KISS product and make money.”  Sadly, the one side of Simmons that doesn’t get enough press is his work on behalf of service veterans organizations.

If anyone from KISS is listening, we would be more than open to having them pay a return visit to a small town in Michigan – how about one in the Upper Peninsula?  Hey, you can’t blame me for thinking big.  Cadillac did.   As KISS departed in their helicopter, they showered the town with KISS LOVES CADILLAC fliers and the people who were there are still talking about it forty years later!

KISS does Homecoming with the Cadillac HS Vikings: 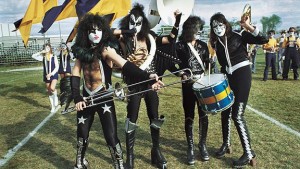