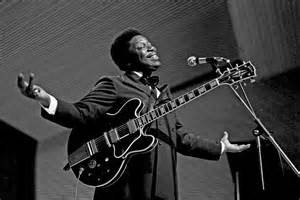 Another King and a Muleskinner have left the building.  While we should feel sad that they are no longer with us, we should also feel a sense of jubilation for the mark they left in the music world.

Though BB King passed away at his home in Las Vegas, Nevada, he was never that far away from his sharecropper roots in Indianola, Mississippi.  I have listened to a lot of blues music and blues players over the years, but I did not really develop my appreciation for the blues until I met our former manager, Mike ‘Zenith’ Bennett.  To say Mike was a ‘blues fan’ is like saying ‘Wisconsin is kind of fond of cheese’.  When I became the station manager in 1997, one of my first jobs was to sort out boxes of mail that had accumulated when Mike was too busy being the elementary principal to keep up and our station staff had dwindled down to not just a ‘skeletal’ level, but down to ‘a femur, a few ribs, and perhaps a skull’.

By chance, the first envelope I opened was from Blind Pig Records ( Blind Pig is a great name and they also have a cool logo – maybe that is why I picked it up) and featured Jimmy Thackery and the Drivers (Drive to Survive).  The fact that I have accumulated most of Thackery’s recorded output since then is a pretty good indicator of the impact that CD had on me.  I found that not only did I like the ‘new’ blues music being put out, I was also gaining a deeper understanding of some of the older, pioneering blues artists.  Zenith Bennett did a lot for WOAS-FM, not the least of which was to leave us with a very large collection in the blues genre.  Even on my last trek to Amoeba Music in Los Angeles in the summer of 2014, I was amazed at how many artists they had in their blues section that are also in the WOAS archives.

I did not understand it at the time, but I now count myself fortunate to have been able to see BB King live at Hedgecock Field House at NMU when I was a student there.  I didn’t know much about him but there were three things that compelled me to see him:  1) I liked the song The Thrill is Gone,  2) I had a night off from my own gigs, and 3) the ticket set me back fifty cents.  The college often sponsored concerts and lectures that were not dependent on ticket sales to pay the full cost, but even by early 1970s standards, fifty cents was one cheap date!  I may have been naive about the blues in general, but I laughed out loud when the two people sitting next to me in the Field House balcony left because they could not figure out which band member was BB King.  Of course, the amp at center stage with his fabled guitar ‘Lucille’  hanging on it by its’ strap was a hint:  his band played a couple of jump blues tunes to warm up the audience before BB himself took the stage but by then, more than a few people had left.  That was too bad because they missed a terrific show.

When the band came back for the encore, I headed to the main floor because the door closest to my house was on the west side of the Field House, right by the stage.  I stopped 20 feet from the stage stairs to watch the encore and when BB came off stage, he started shaking hands extended to him as he made his way toward the dressing room.  I cringe now when I think about sticking out my hand and trying to come up with something cool to say, eventually mumbling something along the lines of ‘Hey BB, you still got it’.  For his part, he smiled and said ‘Thanks, man’ and moved on.  ‘BB, you still got it’?  He must have been all of 45 years old so I am not sure exactly what I was trying to say he still had, but I made a vow right then to not try and say cool things when I meet musicians.  ‘That was great’ or ‘thanks alot’ are about as deep as I get these days.  My other takeaway from my hand shake with the King was this:  He had enormous hands.  He always prefered to play leads and let his second guitarist play chords and I understood that after finding my hand swallowed up in his hand shake.

Donny ‘Muleskinner’ Hawkins left us the same week as BB King and the local music scene has lost one its’ crown jewels.  I met Donny in early 1976 when we both participated in the second Hootenanny benefit concert held at the Ontonagon Area High School.  We didn’t perform together on that night, but sensing I was a little nervous sitting on the stage steps waiting for things to start, he offered me his hip flask and said ‘have a little snort of this, it will relax you’.  As luck would have it, I was in mid-swig when the stage door opened and then HS principal Lou Gregory stuck his head in the door, smiled and backed out when he saw us clustered on the stairs.  Sensing my mounting panic (Headline:  new school employee dismissed for tippling backstage at benefit concert), Donny said ‘Don’t worry, he’s cool’.

Not long after my first Hootenanny, I was asked if I would be interested in filling the drum chair for local band Easy Money when Donny was on shift work.  I played occasional gigs with them and eventually succeeded Donny when he left the group.  I always enjoyed Easy Money gigs when Donny would show up and belt a few signature tunes like Black Slacks or Muleskinner Blues.  Donny not only had the pipes to sing anything from country to old time rock and roll, he had an amazing catalog of songs, many of which I heard the first time when we backed him up.  Donny would often sit in on the drums as well as sing.  Drummers love having someone sit in so they can visit the bathroom or the bar from time to time.  Donny would often say ‘I am not much of a drummer’ but the truth be told, he was a very original drummer and he had his own style of playing.  I am glad that I was never asked to sing or play like Donny when I joined Easy Money because I would not have been able to do either of those things.  Donny was an original and a talent whom we are all going to miss.