On Thursday, August 20, 2020, a group of volunteers gathered at the Ontonagon Area Schools / village tennis courts on Parker Avenue to prepare them for new nets.  The cost of the three nets and three new tensioning cranks came from four donations to the school district.  Ken and Chris Raisanen of Ontonagon applied for two $250 Thrivent Financial Action Team grants to help improve outdoor recreation opportunities for students, village residents, and visitors.  This $500  covered the cost of the nets and the Ontonagon Men’s Association answered the call by donating another $175 to cover the cost of the new cranks.  When it became apparent that OASD maintenance supervisor Bob Clark would need to manufacture new mounting plates for the tension cranks, WOAS-FM and the OASD JH Student Council offered to cover the cost of the mounting hardware.

The tennis courts were originally built in the late 1980s as a collaborative project between the school district, the Village of Ontonagon, and the Smurfit-Stone mill.  After the closure of the papermill, the school district and village have continued the partnership to care for the tennis courts.  In 2014, Ken Raisanen applied for a grant from the Portage Health Foundation to do a series of improvement projects to the trail system located in the wooded area west of the OASD building on Parker Avenue.  The southern section of this wooded area includes the tennis courts and became part of the improvement project.  The poor drainage south and east of the courts caused significant ponding of water so a smaller grant was used to fill and grade this area.

Students from the OASD Senior Service Project Class and the seventh grade Physical Education classes utilized some of the money from the PHF and several other smaller grants to spruce up the trails and the court area.  The SSP class built and installed a practice backboard.  The PE classes cleared brush and debris along the fence surrounding the courts.  The village crew and local contractor Tom Picotte assisted with the brush removal and spreading fill needed to level the low area surrounding the fence.  The COVID-19 forced closure of the school prevented the PE classes from doing their normal spring clean up this year.  The school and village have kept the grass trimmed and mowed but there was a significant amount of leaves, brush, and vines that needed to be removed from the inside perimeter of the fence.

Scattered thunderstorms rolling in off Lake Superior threatened the work bee scheduled for August 20, but six volunteers dodged the few raindrops that fell during the two hour clean up.  The high humidity and dark skies may have discouraged others, but the ones who did participate kept up a steady pace until peals of thunder convinced them it was prudent to stop.  Approximately half of the court fence area was cleared and there are plans for another session this fall.  The seventh grade gym classes adopted this area as a community service project for several years and it is hoped that they will be able to help out again this fall. 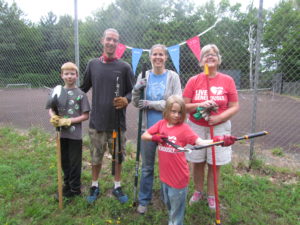