The more I think about the longevity of some bands, the list of those who would fit in this article gets longer and longer.  The original idea was to talk about bands still playing after their early careers came and went.   I put a band on my list if they carried on with at least one original member.  I may have found myself a Mobius strip of an article idea because I keep going around and around the loop without running out of bands that fit this description.   In that I would like to wrap up this particular discussion, I am going to limit part 3 to only three bands:  a British band, and American band, and one local band.

The British band in question is The Who.  When Roger Daltrey famously sang ‘I hope I die before I get old’ ( My Generation 1965), not even the band could have foreseen having a career of more than fifty years.  While guitarist Pete Townshend and Daltrey are in the midst of yet another ‘final tour’ (or were going to be on tour until Daltrey’s health problems forced them to postpone things until next year), they are the last two legs of the four-legged stool that comprised the original band.  Sporting an exceptionally creative rhythm section of Keith Moon (drums) and John Entwistle (bass), it is a sad commentary that both would succumb to rock and roll excess.  Moon flamed out on September 6, 1978 when the combined effects of alcohol and pills (and a long history of abusing himself with both) overwhelmed him at a time when he was actually trying to sober up.  The quiet, introspective Entwistle died of a heart attack in June of 2002 with cocaine listed as a contributing factor.   With nicknames like ‘The Ox’ and ‘Thunderfingers’, Entwistle is said to have elevated bass guitar in the same way Jimi Hendrix elevated six string guitar.  On stage, he was always ‘the quiet one’, but apparently not so much in private.

Many thought it unlikely that the band could go on after Moon’s death.  Kenney Jones (Small Faces) filled the drum throne for a number of years but was too often criticized for ‘not being Moon’.  In more recent times, Zak Starkey (son of Ringo Starr) has filled in admirably and while no one could exactly replicate the way Moon played, he has kept the spirit of the music The Who created with Moon alive.  He was invited to join the band as a full member but declined as he had also been invited to join Oasis. He effectively split his time between both bands until Oasis imploded.

Entwistle’s role in the band has been ably covered by session pro Pino Palladino.  A Welshman whose father was Italian (hence his given name of Giuseppe), he has played with a who’s who of musicians from both sides of the Atlantic.  He was Townshend and Daltrey’s first choice to replace Entwistle.  Along with Starkey, he holds down the bottom end of The Who very well.

There have been a bevy of supporting guitarists and keyboard players who have toured with the The Who.   Among them are Townshend’s brother Simon and Texan John ‘Rabbit’ Bundrick, but Starkey and Paladino have been permanent mainstays since the death of Moon and Entwistle.

The American band I want to finish with is Chicago Transit Authority who became more commonly known as Chicago after the real CTA threatened legal action over the use of its name.  An unusually large band by late 1960s standards (The Mothers of Invention, Chase, and Blood, Sweat, and Tears being early examples of larger ensembles playing rock-fusion music), they are still on the road with four of the original band members.  The founding band members still on the road are keyboard player Robert Lamm and the complete horn section of James Pankow (trombone), Walter Parazaider (saxophone and flute), and Lee Loughnane (trumpet).  The other originals trickled out of the band for the usual reasons.  Tragically guitarist/vocalist Terry Kath exited the band first as the result of a self inflicted gunshot to the head while fooling around with a pistol.  Kath was such a force in the band, the band has gone through an entire roll-o-dex of guitar players since his untimely death in 1978.

Bassist/vocalist Peter Cetera departed in 1985 as his solo career began to blossom.  The band’s first choice to replace him was Richard Page, the bassist/lead vocalist of Mr. Mister but he declined the offer.    Jason Scheff, son of Elvis Pressley‘s bassist Jerry Scheff joined and remains with the band today.

Superlative drummer Danny Seraphine left the band in 1990 (or was dismissed, depending on whose version of the story you wish to believe) because he disagreed with the direction the band was taking.  In 2006, Seraphine formed his own CTA – the California Transit Authority – with whom he continues to play the type of horn fueled music he preferred when he was with the Chicago.  His replacement with Chicago was former session and touring drummer Tris Imboden who has worked with Kenny Loggins and Peter Cetera among many others.  The Chicago website lists ten other musicians who have come and gone over the years but the four core members are nearing their fiftieth year together while their rhythm section has been the same for half that time.

There are many examples of musicians from the local area who have formed bands in various combinations over the years.  The band that gets the longevity award for the Ontonagon area would have to be Easy Money.  Mark Bobula joined the band in 1973 and by his count has seen close to 60 different members pass through the ranks since he joined.  Original members Wayne Shamion (guitar) and Donny ‘Muleskinner’ Hawkins (drums, vocals) are no longer with us while guitarist Jerry Monk’s most recent appearance with the band was at the Easy Money 40th Anniversary Concert held at the Ontonagon Theater for the Performing Arts over Labor Day weekend of 2013.  The musicians who have cycled through Easy Money have been young, old, male, female, and in more recent years, imported from all over the map.  Through it all, Bobula has been the connecting thread.  When we recently discussed his busy schedule, he laughed and commented, “It is always interesting to book a job and then start looking for enough guys to play it.”   For some smaller jobs, Mark has been known to play with an electronic drummer and perhaps another guitarist.  Some gigs will see four to six players wedged in across the stage front and the music played can range from classic rock to country (old or modern) to polkas.  An evening with Easy Money is never a dull affair.

I have been lucky enough to have had several stints with Easy Money beginning in 1976 – 1978 when I joined original members Mark Bobula and Jerry Monk.  After returning to NMU for a year, I landed back in Ontonagon and was a summer fill in for several years in the early 1980s joining Bobula, John Fischer and Dave Morehouse.  For the past decade, I have been an ‘occasional hired gun’ for various gigs with a rotating cast including one of Mark’s oldest musical buddies from Iron River, Charlie Christenson (guitar/vocals) as well as Ontonagon’s John Reid (bass) and Eugene Soumis (guitar/vocals).  Many of the gigs I have been involved with are for various charitable causes that Easy Money has been happy to support over the years.

This past summer, I got to play a couple of times at the Ontonagon Eagles Club that were typical for the current Easy Money band.  The first included Bobula and Christensen (guitar/vocals), Jack Jolliff (acoustic guitar/vocals) and Dave Stahl (bass/vocals).  Stahl and Christensen had to travel from Dollar Bay and Iron River, respectively,  and while Stahl is primarily a guitar player, on this night he filled in very capably on bass.  Two weeks later, the same group performed together again only this time, Christensen was replaced by Eugene Soumis from Ontonagon.  At both gigs, Jolliff started the evening by ‘introducing the band’ and then literally (and semi-seriously) introduced the band members to each other.  The number of rehearsals held by these two groups of musicians?  Zero!  The number of songs available from this assembly of long performing musicians?  Too many to count!  The level of fun for the musicians involved?  Off the scale!

There is another musician in Ontonagon County with over 40 years in the business who has been the connecting thread between several bands.  Mike Urbis began his musical career in the early 1970s with the Urbis Brothers band and has carried on to the present with The Copper Drifters and his current band Borderline.  I plan on picking Mike’s brain a bit because I am sure there are more than a couple of interesting gig stories he will be willing to pass along from his bands.  Mike’s time with Borderline alone has stretched to more than twenty years so we will save that topic for a future installment of FTV.

I am not trying to slight the many members who have played with the Easy Money band over the years by not listing them here because a) the list would be longer than the article and b) I would surely miss someone.  Suffice to say, if you get a chance to see the Easy Money band along the way, make sure you pay attention when Jack introduces the band.   The odds are good that at least one or two of them will also be getting their first introduction to the rest of the band. 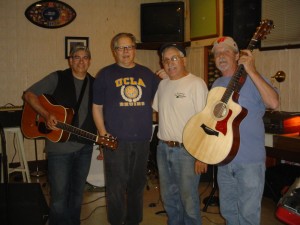