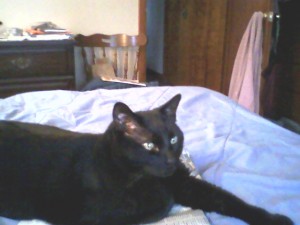 Every pet owner knows that their pet is the best ever – so we sadly announce the passing of our Mr Mittens aka Mittu, our wonderful Hemingway polydactyl cat.  He was a large, shy black cat with probable Maine Coon genetics (a BIG boy) who brought us much joy.  Alas, at approximate age 15 (he was a shelter cat from OCAP before there was a shelter and then returned when his elderly owner died – thus becoming an OCAP legacy cat whose quirky personality shortened his second shelter stay by a lot by grabbing a hold of my wife’s soul . . .) and after 4 years of training his staff, he contracted a lymphoma that ultimately lead to the end of his life.  He was a gentle soul to the end and we can not thank Dr. Sturmer, Dr. Griffin, Erin, Donna, Chelsea and everyone else at Deepwoods Veterinary clinic for their kind and gentle care of our boy.   ker

Gone but will never forgotten.  Adopt a shelter cat or dog today – they need you and you need them!  The following poems were given in tribute to this great cat from my wife’s favorite poets:

I have ever learned

leads back to this:  the fires

and the black river of loss

none of us will ever know.

To live in this world

you must be able to do three things:

to love what is mortal;

against your bones knowing

your own life depends on it;

and, when the time comes to let it go,

I will close now with another poem by Mary Oliver. She adopted a dog who had a sad past and significant problems, but they had a deep and meaningful relationship before he passed on.  CR

The first time Percy came back

he was not sailing on a cloud.

He was loping along the sand as though

he had come a great way.

“Percy,” I cried out, and reached to him-

but he was unreachable.  As music

is present yet you can’t touch it.

“You’re going to be very surprised.”

But I wasn’t thinking of that. I only

“I miss that too.

And now you’ll be telling stories

of my coming back

And we walked down the beach together.