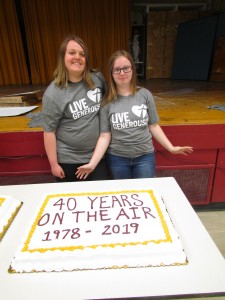 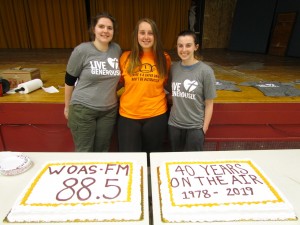 How does one serve cake and ice cream to 300?  Easy – find five willing volunteers who jump in feet first and get it done – THANK YOU so much to (l-r) Paige Weisinger, Caden Cleland, Kati Dombraski, Dominique Hamm, and Ailee Graff for making our 40th Year on the air celebration a big success.

We also thank Thrivent Financial Services for the grant that paid for all of our fun! 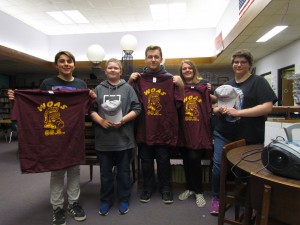 It would note be a true celebration without door prizes and the lucky five shown above had their slips drawn at random – they selected either a WOAS logo shirt or hat as their prize!  Wear them with pride!

{Below is the original announcement of the 40th Anniversary event that was held June 5, 2019)

WOAS-FM 88.5, your locally owned and operated public radio station began broadcasting in December of 1978, making the 2018-19 school year the station’s 40th year on the air.  Licensed to the Ontonagon Area Schools by the Federal Communications Commission, the station was conceived and constructed under the direction of former OASD librarian Thomas Graham Lee.  Lee applied for grants, solicited donations of used equipment, and coordinated the volunteer labor needed to construct Ontonagon’s first local radio station. WOAS-FM has been on the air continuously since that time with the exception of a brief hiatus each July when school is on summer break.  The station has operated under the direction of four different General Managers over the years: Tom Lee, Margaret Muskatt, Mike ‘Zenith’ Bennett, and current GM Ken Raisanen.

Other than some very specific technical work that needed to be contracted out over the years, WOAS-FM has been kept on the air with a 100% volunteer staff.  The last major studio upgrades and renovations took place between 1999 and 2001 and were financed by $9,000 in grants from the Ontonagon Area Schools, UPPCO, and public donations.  GM Ken Raisanen recently applied for and was approved for a grant from Thrivent Financial to help celebrate the station’s 40th Anniversary and to recognize the many volunteers who have donated their time to make WOAS-FM ‘Your Sound Choice’.

One of WOAS-FM’s first promotional taglines was ‘The little sound by the big lake’, a nod toward the station’s ten watt broadcast signal.  Because of the way FM radio signals travel, the signal must have a clear path from the tower located at the OASD building in Ontonagon and your radio.  Depending on the local terrain, the signal reaches a radius of approximately 20 miles from Ontonagon. WOAS-FM predated the Low Power FM (LPFM) stations that have sprung up around the country more recently.  Lacking the financial clout to upgrade to a stronger signal, WOAS-FM has remained at ten watts, but that doesn’t mean that the station has been limited in reaching out for new listeners. Advances in streaming technology and volunteers well versed in this emerging broadcast medium allowed the station to begin dabbling in broadcasting via the internet twenty years ago.  Now WOAS-FM is not only “bad and nationwide” (to paraphrase a lyric by ZZ Top), WOAS can be heard and seen around the world. Recent volunteer DJs have adapted to the technology innovations well enough to have regular, real time contributors join their shows from as far away as Massachusetts and Germany. Musical artists, record labels, Public Service agencies, and the WOAS-FM West Coast Bureau in Oregon provide digital content for broadcast.  As emails traffic indicates, new listeners have also joined the WOAS family from distant places far too numerous than space allows to list here. It took some time and tweaking, but WOAS now has a stable web presence streaming audio, live video, and local weather at our website: www.woas-fm.org .

To celebrate this 40th year milestone, WOAS-FM volunteers will be serving cake and ice cream to the K-12 student body, faculty and staff after their lunch periods on Thursday June 6, 2019.  After the school day concludes, the public is welcome to visit the WOAS-FM studio located in the OASD school library from 3:30 to 4:30 for more cake, ice cream, and a station open house. Everyone who helps us celebrate will have the opportunity to join a door prize drawing for a WOAS-FM T-Shirt or baseball cap.  All of the festivities will be paid for by the Thrivent Financial grant that was obtained for this special occasion.